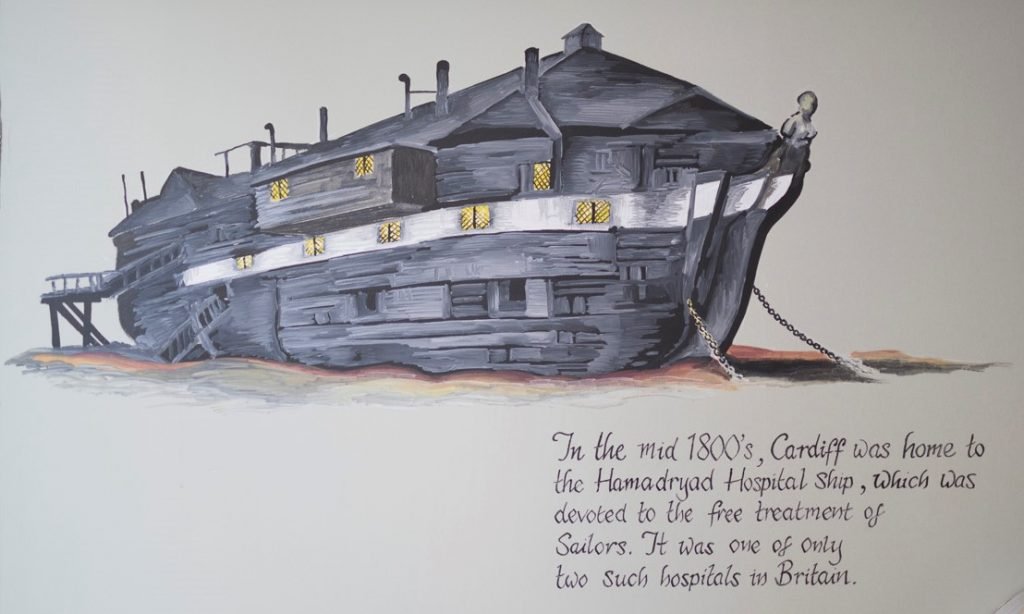 Celebrating the beautiful artwork created for each store

Anyone who has visited a few of our stores will be familiar with the décor we use- the cosy chairs, the muted colours, the rustic feel; all designed to help you relax and feel at home whilst you pause for a while and enjoy a coffee. You might also have noticed the little touches, like the quotes which adorn the walls, or the individual murals which are like hidden gems in each store. These murals are the work of the talented Rob Amos, who has been working with Coffee#1 for as long as we can remember. In the early days Rob’s work revolved around the theme of eccentric flying machines, manned by top-hatted professors or daring adventurers and carrying sacks and crates of coffee suspended from ropes. This theme originated from the fact that some of our first stores sprung up on either side of the Bristol Channel, where, in the 19th century, the aeronauts of the day would sail their hot air balloons between South Wales and the West Country. As Coffee#1 stores started opening further afield, we decided that the new stores should incorporate artwork reflecting the local history of the area, so Rob began searching for elements of local lore which would lend themselves to being depicted on the walls of each new shop.

Rob usually strives to depict lesser-known aspects of the region’s history when planning his murals, though sometimes the association of a particular location with well-known historical events or personalities is so great that the art will focus on this as the central theme. That said if Rob can dig up some fact which the locals might not be aware of he will try to incorporate it into his artwork. For example in the Ringwood (Hampshire) store, whilst locals and visitors alike will probably be aware of the clearing of the New Forest area of villages and rural hamlets for use as land for hunting grounds following the Norman Conquest, people are less likely to be aware of the Swing Riots – An uprising of rural labourers and farm workers which swept across the south of England during the early 1800s in response to the introduction of mechanised farm machinery. As a result Rob has drawn on both historical events to capture the character of the town inside the store. So, whether you live locally to a Coffee#1 store, or drop by on a touring visit to a particular part of the country, we hope that the artwork inside points you towards some of the less well-known aspects of the local history.

When pressed for his favourite mural, Rob said;

‘If I had to pick a favourite piece of mural artwork painted for Coffee#1, it would be the Chartist mural in the Newport (South Wales) Friars Walk shopping complex. This was a recreation of a section of the Chartist Mosaic mural, designed by Kenneth Budd, which had been demolished (not without some controversy) during the construction of the shopping centre.

Many of the shop fitting crew I’ve worked with on Coffee#1 stores, being local to Newport and the surrounding area, had expressed dismay at the destruction of the original mosaic, representing as it did an important episode of ‘People’s History’ which they felt was personal to them.

Given the circumstances, I decided to produce my own rendition of the mural’s central part, exchanging the faces of the original characters for the faces of the carpenters, electricians and decorators I work alongside when painting artwork for Coffee#1. I hoped that people using the new complex would be pleased to find this recreation of a cherished piece of local art in their new Coffee#1 store, preserving in some small way an interesting part of the local social history.’

So next time you’re out and about in a Coffee#1 store, see if you can spot a little of Rob’s handiwork- a flying machine above the fireplace; a cheeky mouse by the skirting board; or a fantastic piece of local history writ large across the coffee shop wall. And then tell us- which is your favourite mural? For more of Rob’s artwork, take a look at his Instagram page- @amosmurals